“Marriage is one of the “basic civil rights of man,” fundamental to our very existence and survival. … To deny this fundamental freedom on so unsupportable a basis as the racial classifications embodied in these statutes, classifications so directly subversive of the principle of equality at the heart of the Fourteenth Amendment, is surely to deprive all the State’s citizens of liberty without due process of law. The Fourteenth Amendment requires that the freedom of choice to marry not be restricted by invidious racial discrimination. Under our Constitution, the freedom to marry, or not marry, a person of another race resides with the individual and cannot be infringed by the State.”  (Chief Justice Earl Warren-June 12, 1967)

Pictured above:  Richard Perry Loving and Mildred Jeter Loving the first interracial couple to win the Supreme Court on passing a law to allow whites and colored to be married according the rights of man.  Loving-v-Virginia a 1967 court case with the help of the ACLU, it was brought to the attention of the Supreme Court after Mr. and Mrs. Loving fought to have the right in Virginia to be together as husband and wife and did not want to be separated because of hate. On April 10, 1967, the case was heard and on June 12, 1967, it was declared that the Pace-v-Alabama of 1883 was unconstitutional, violated the Equal Protection Clause of the 14th amendment and overruled by ending all illegal restrictions on marriage in all states except Alabama, which later joined after Nixon got involved. 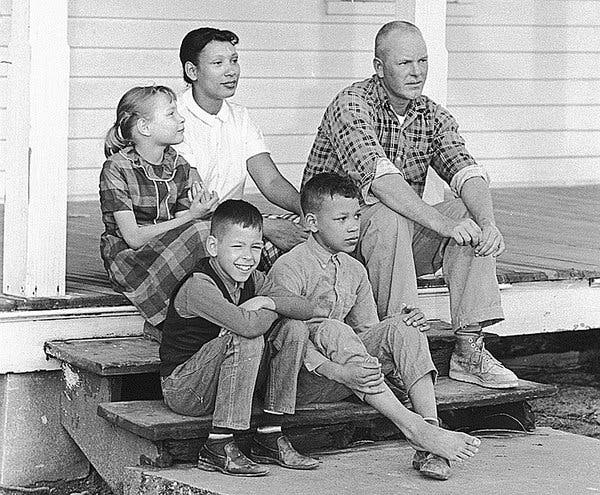 Pictured above: Richard and Mildred Loving with their children Donald, Peggy and Sydney.

Pictured above: The “Loving” movie that recreated what they went through in their struggle to be together.  On June 12, 1967, they declared it “Loving Day” in honor of Richard and Mildred Loving.

Pictured above: Books that are available on Amazon about Mr. and Mrs. Loving. Pictured above: Richard Perry Loving died in 1975 at the age of 41 after being killed by a drunk driver, his wife Mildred Jeter Loving lost the sight in her right eye in the same accident and later died at the age of 68 years old from pneumonia on May 2, 2008 in Central Point.